This early medieval pillar stone is located close to the Donagh Cross in Carndonagh, County Donegal.

We have replicated the complete stone as a pendant and used parts of the pattern in our cufflink range.  The Marigold Stone has also inspired two additional collections: The Marigold Floral and Marigold Maze.  Available in silver and 18ct yellow or rose gold

More on The Marigold Stone 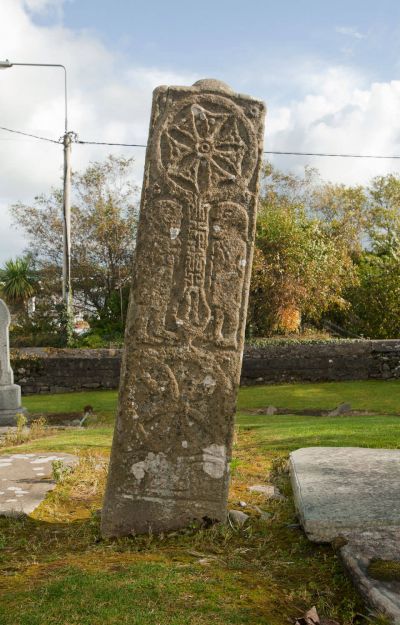 West face of the Marigold Stone
Photo by Mark Willet 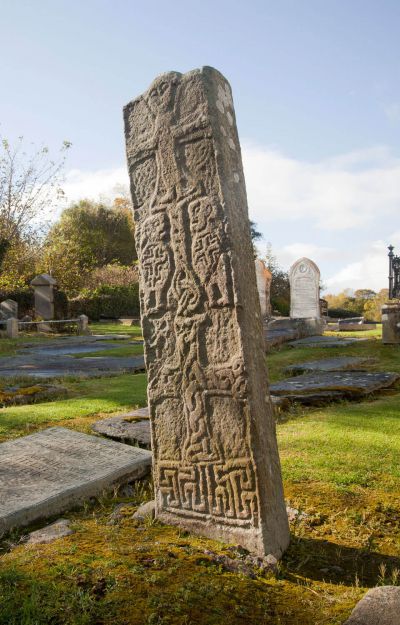 East face of the Marigold Stone
Photo by Mark Willet

The original Irish name of Carndonagh, (Carn Domhnach) means the burial mound of the church, referring to what was once the location of a church founded by St. Patrick in the fifth century and later developed into a major ecclesiastical centre of learning. Irish monastic schools were celebrated throughout Europe for their teaching and students came from all over the continent to study not only biblical subjects, but also classical Greek and Roman literature. Carndonagh also gained prominence as a place of pilgrimage due to links with both St Patrick and St Columba.
Places made holy by the blessings and presence of the Saints through relics became the focus of pilgrimages, particularly celebrated on the feast days of the saints. Seeking spirituality through fasting, penance and prayer, the pilgrims would follow a prescribed route. Pillar stones and crosses were made to mark the significant points on these routes. 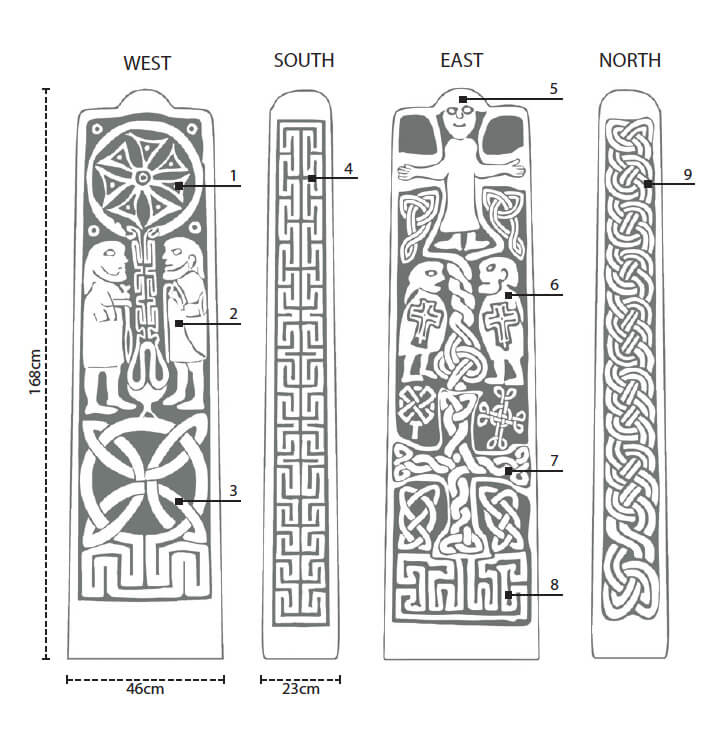 The Marigold Stone is named after this seven petalled motif 1. with a long stem or handle. It is thought to depict the Cuilebaidh, a relic of Saint Colmcille which is believed to have been a flabellum (a liturgical fan used in warm climates to keep flies away from the alter). The Greek key patterned stem ends in two loops imitating leather thongs for hanging up the fan when not in use.

Two figures are dressed in knee-length robes. The figure 2. holding a drop headed staff or crozier and carrying a satchel on the right has been identified as a pilgrim. The figure on the left holds what may be a tau crozier with a vertical slot carved above the pointed foot. In the old Irish Annals, the expression “he took the staff ” was used to describe someone on a pilgrimage. This cross of arcs 3. which forms a Maltese cross in recess appears in carvings on many pilgrimage sites throughout Ireland.

This unusual domed projection 5. forms the top of the enlarged head of Christ. Early Irish representations of crucifixion focused on Christ’s triumph rather than his suffering and as clearly seen here Christ is depicted with open eyes and a broad smile. Two figures 6. whose robes are emblazoned with a cross possibly depict ecclesiastical figures or saints.

The Eastern Mediterranean influence is apparent in the many Greek key or maze patterns 4. 8.  .Various crosses and motifs also feature celtic interlace 7. 9. .

Copyright © Faller 2015.Reference from Peter Harbison’s book, ‘Pilgrimage in Ireland: The Monuments and the People’. With special thanks to Seán Beattie and the Donegal Historical Society.