1. The Golden Teapot at Faller

The Golden Teapot at Faller

The Golden Teapot at Faller is a unique example of a nineteenth-century trade sign.

Long before trades had large shop windows to display goods and when reading and writing were still a rarity, signs were hung outside shops and businesses to draw attention to their goods and services. These were carved or constructed, mainly in wood or metal, and then painted or gilded.

During the early nineteenth century, Derry moved up from being the twelfth largest town in Ireland to being the fourth. People moved into the town after the terrible famine in the countryside as the shirt factories were providing a degree of prosperity. The city’s population quadrupled and the town rapidly expanded to deal with the influx.

At the beginning of the nineteenth century, Waterloo Place, named after the Battle of Waterloo in 1812, was mostly slob land that had to be reclaimed from the mudflats along the Foyle. By the mid-century, this area had developed into a prosperous part of the city.

The Golden Teapot first appeared in September 1866.  At that time, notices in the Londonderry Sentinel, Londonderry Standard, and Fermanagh Mail headed, “THE GOLDEN TEAPOT,” advertised John Parkhill’s new grocery business in Waterloo Place. John Parkhill took over premises from Mr James Brown. The Teapot was made from copper sheet segments lead soldered together and is likely to have been made by tinsmiths. While there were several firms in the city capable of making it but there are no records of its construction surviving today.

In 1912 the company sold the Waterloo Place retail premises on to Mr William J. McCullagh. Mr McCullagh had been one of their employees for the previous 11 years. Originally from Donemana, William McCullagh came to Derry as an apprentice to the grocery trade in 1884. He had gained extensive experience as a traveller for Maxwell, Greer & Co and then for Holmes & Mullin. His attention to detail, progressive attitude and courtesy gained him wide support and the grocery and provisions store was greatly developed under his leadership.

During the civil disturbances of the 1920s, the teapot suffered two bullet holes. One report in that year stated:

“Tension continued to build as preparations were being made by the government for the partition of Ireland. In April, May and June of that year serious rioting and gun-battles took place in the city. In all, forty people were killed. By Christmas 1920, Ireland had been effectively partitioned.  Despite the total opposition of the local (majority) Catholic and nationalist community, Derry remained in the United Kingdom. Part of the six counties that formed the state of Northern Ireland.”

Mr W.J. McCullagh’s  sons Harold and Norman  succeeded him after his untimely death from a heart attack on 12th January 1928  aged about 50.

At various times in the past, there was a facility for steam to emerge from the pot’s spout. It was originally generated by a small boiler inside the building that passed the steam out through an internal copper pipe. By the 1930s, however, this had ceased to function. 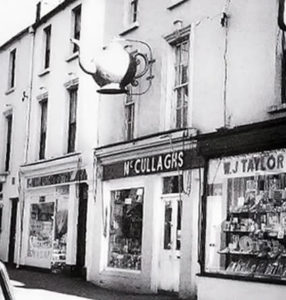 In 1963 the Teapot was taken down for the first time in almost a century when McCullagh’s shop at Waterloo Place was demolished to make way for the building of the new Savings Bank. It was taken to Mc Cullagh’s garage in Clooney Terrace in the Waterside. There it underwent an overhaul before being reinstated above McCullagh’s other branch at 55 Clooney Terrace.

Displayed in Waterloo Place for nearly a century the Teapot barely lasted a decade in Clooney Terrace. In the early 1970s when McCullagh’s grocers closed after Norman McCullagh’s death the Teapot was taken down and stored away. Gone from public view, the Golden Teapot became just a memory for most of the Derry people.

Noel Faller bought it from Mrs Jean McCullagh in 1974. The teapot was kept safely in storage through the turbulent era of the troubles.

For those that remember when the Golden Teapot was last on display…..
In August of 1990, in an effort to improve the community’s civic awareness and appreciation, the Foyle Civic Trust held a Shop Front Competition. The general public nominated their favourite shops, 261 in total. From these, the judges selected the Acorn, the Linenhall, and the Sentinel as the winners, with each owner receiving a prize of £250.  St. Columb’s College and Steelstown Primary school received special prizes in recognition for the quality of artwork in their nominations.

An exhibition of old shop signs and advertising material was held in the Central library in December for the presentation of prizes by the minister, Mr Needham. The star of the display was the Golden teapot, lent by Noel Faller. The mayor and John Hume were among the dignitaries present.  The exhibition continued in the central Library for almost 3 weeks and then moved to the Waterside library for a further 3 weeks. Pictured from left. Mr Joe Tracey, Chairman of the Foyle Civic Trust, Northern Ireland Minister of the Economy, Mr Richard Needham, Foyle MP, Mr John Hume, and the Mayor of Derry, Colr. David Davis.

Fallers began restoration work on the teapot in the 1990s. David Thomas, a highly-skilled silversmith who had previously worked in the firm’s jewellery workshop carried out the restoration. He carefully removed the dents, repaired holes, replaced the iron base with copper, and strengthened the teapot on the inside with fibreglass matting. Finally, he applied fine gold leaf to the entire exterior.

At that time a replica iron wall bracket was made in a local engineering works but in 2000 it was decided to re-design the fixing to meet today’s safety standards. Local engineer Edward Meenan designed and built a new bracket from stainless steel box section. It was coated in black powder for long-term ascetics and to prevent water staining on the teapot. It will also allow the teapot to be easily removed for cleaning and re-gilding every five years or so.

Fallers hoped to restore it using a steam boiler as used in Derry’s shirt factories to iron shirts. This plan proved problematic, however, as it meant having a boiler in one of the firm’s workshops, and that raised health and safety issues. It was also going to be difficult to regulate steam pressure. Too much steam emerging from the spout would make the teapot look more like a kettle.

Edward Meenan undertook much research to solve this problem. The decision was made to install a smoke generating machine that produces a plume of white, water-based environmentally friendly ‘steam’. It dissipates within 20 seconds but has the advantage of being visible even on sunny days.  This machine can control the function to allow the ‘steam’ to be emitted on the hour every hour.  As the firm no longer sells clocks or watches, this prompted Noel Faller to quip, “Although we don’t sell time, we will still tell the time”.

The Golden Teapot was installed on the façade of Faller the Jeweller at 12 Strand Road early in the morning of the 20th of January 2013 by Edward Meenan and his team. This marked the 130th year since the first Faller shop was opened in Derry city by William Faller, a 23-year-old German immigrant. The firm’s present owner is his grandson Noel.

The teapot itself weighs 74kg and the wall bracket 19kg; the teapot is 1940mm from handle to spout and has a diameter of 1100mm.

Derry folk can be proud that their magnificent Victorian trade sign is back on display again. The Golden Teapot previously hung in the city for over 100 years. It has had an eventful history and the fact that it has survived so long is remarkable. With the steam spouting from the teapot on the hour every daylight hour, it is hoped the teapot will capture the imagination of all who see it.  As a major landmark in the city, it is likely to become a popular meeting point again. 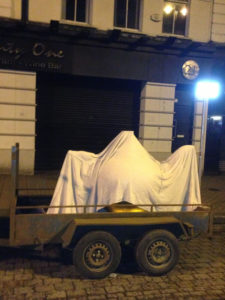 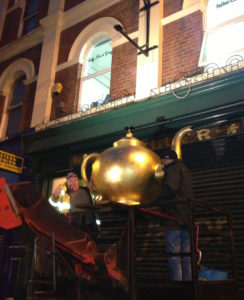